Soil organic matter (SOM) is considered as the backbone of soil health and soil quality. Thus, its’ estimation is critical to support the development of management decision including precision agriculture. To overcome challenges of laborious, rather expensive and time-consuming laboratory measurements, recent advances in image acquisition systems provided a new dimension of image-based SOM prediction. However, challenges remain in using soil images taken directly in the field due to variable soil surface conditions including vegetation cover, illumination, and soil moisture. Soil moisture can significantly influence soil color and thus confounds the relationship between SOM and soil color. This study quantifies the effects of soil moisture on the relationship between SOM and color parameters derived from cell phone images and establishes suitable SOM prediction models under varying conditions of soil moisture contents (SMCs). To simulate the continuous variation of soil moisture in the field, air-dried ground soil samples were saturated and allowed to dry naturally. Images were captured with a cellular phone over time representing various SMCs (set of images). Final set of images were captured on oven-dried samples. Images were preprocessed using illumination normalization to avoid illumination inconsistencies and segmentation technique to remove non-soil parts of the images including black cracks, leaf residues and specular reflection before modelling. Five color space models including RGB, HIS, CIELa*b*, CIELc*h* and CIELu*v* were used to quantify soil color parameters. Univariate linear regression models were developed between SOM and color parameters and an optimal set of color parameters that are capable of resisting variation in SMC was determined. It was observed that SMC exerted a considerable influence on SOM prediction accuracy when its value reached >10%. The threshold of 10% SMC was considered as the critical SMC. Consequently, stepwise multiple linear regression (SMLR) models were developed for soil samples with SMC below and above the critical SMC. For the soil samples at below the critical SMC, the color parameter R based model produced satisfactory prediction accuracy for SOM with R2cv, RMSEcv, and RPDcv values of 0.936, 4.44% and 3.926, respectively. For the soil samples at above the critical SMC, the SOM predictive model including SMC as a predictor variable showed better accuracy (R2cv=0.819, RMSEcv=7.747%, RPDcv =2.328) than that without including SMC (R2cv=0.741, RMSEcv=9.382%, RPDcv =1.922). This study showed potential of cellular phone to be used as a proximal soil sensor fast, accurate and non-destructive estimation of SOM both in the laboratory and field conditions. 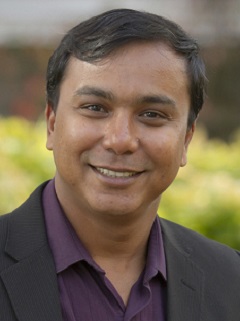 Dr. Asim Biswas is an Associate professor at the School of Environmental Sciences at the University of Guelph, Ontario, Canada. He runs a research program on data-driven sustainable soil management focussing on to increase the productivity and resilience of land-based agri-food production systems, so they reflect their locational characteristics, are environmentally sustainable and account for a changing climate, economy, production methodologies and technological interventions. Dr. Biswas is the President-Elect of Canadian Society of Soil Science and leader in many communities in groups within the Soil Science Society of America. Dr. Biswas is also the Canadian representative lead to the ISPA.